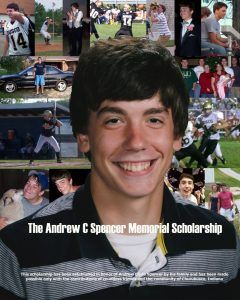 Created in memory of Andrew Spencer, this scholarship is available to a senior male athlete from Churubusco High School pursuing a four-year baccalaureate degree at any college or university. The applicant must be a four-year participant in at least one organized high school sport, be in the top half of his class with at least a GPA of B or better, and be a member of a Christian church.

To nearly everyone he was simply “Andy”. It was all that was necessary: everyone immediately knew who you were talking about. And more often than not, a smile was on your face.

Andy was born December 15, 1991, the youngest child of Michael and Cathy (Lonsbury) Spencer. He had lived within the Churubusco community his entire life. He was a confirmed member of Faith Lutheran Church. Andy was fun, enthusiastic, and energetic. Andy was athletic: he was a letterman in football and baseball, played American Legion baseball in the summers and basketball his freshman & sophomore years. His sister Samantha had graduated from Churubusco High School in 2004 and his brother Bobby in 2006. Andy was to graduate with the class of 2010. But on July 16, 2009, Andy and his friend Megan Young died in a one-car accident a few short miles between their respective homes. Two bright and beautiful people were suddenly gone from our sight. No longer could we hear their voices. No longer could we touch them. And the world changed for many of us.

The family desired to provide a scholarship each year to an outgoing high school senior with attributes similar to those Andy possessed. A few specific qualifications are quickly identified as appropriate links to establish candidates: school affiliation, gender, academic standing and sports. But these are a bit like initial screening requirements. Selection of an appropriate recipient then requires establishing factors to evaluate the candidates against. This would be a much simpler task if Andy had been overwhelmingly passionate about some cause or perhaps had aspired to dedicate his life to some noble pursuit for the greater good: the discovery of a cure for cancer, world peace or the invention of a renewable energy source. But the fact of the matter is, in many respects, Andy was a very typical young man of 17. He liked sports, music, movies, video games, girls and hanging out with his friends. He was a good student, but he wasn’t destined to be a Rhodes Scholar. He was a very good athlete, but it was rather unlikely we were going to watch him play Sunday afternoons on our living room TV. He was a great person, but he wasn’t a saint-in-the-making. He had a fantastic smile … but assessing the smiles of scholarship candidates as the basis for selecting a recipient just doesn’t seem to be quite … comprehensive enough. So what should be the determining factor, or factors, to distinguish one qualified applicant from another?

The answer to this question materialized from defining Andy’s attributes based on the inputs of his family, friends and the people who knew him. Their inputs were so similar that a common, reliable and accurate description materialized. They cited his friendliness; his humor & wit; his kindness & compassion; his child-like enthusiasm & excitement; his energy; his maximum effort & commitment; his team-first attitude; his perseverance and his rare ability to be a good listener. They noted a courteous and respectful manner; unassuming leadership; honesty; generosity; loyalty; dependability; spontaneity and a great love of family and friends. Andy was the best of friends. Andy was laughter. He was fun without crossing over the line. These things can be summed up as … heart and spirit.

Andy was a shining example of both. These are what made Andy so remarkable. This scholarship was not established to remember Andy because of his untimely death, but because the person that he was and the way that he lived are worth remembering, honoring and celebrating! Andy lived his life with values and character that effortlessly brought joy to those around him. In this, he was like few others. In this, he excelled.

We lavishly award athletic achievement and exceptional scholastic aptitude: praise-worthy accomplishments. But they pale in contrast to Christian values of virtue, moral character and love. Andy touched the lives of so many around him in a positive and selfless way. The world needs to prosper more people like Andy. Heart & spirit should be sought out, recognized and rewarded.

Andy’s future plans after high school were just beginning to take shape. While many specific details were still to be determined, all potential paths considered had included continuing his education at a college or a university. Andy had come to understand the value and importance of education in moving his life forward the next step. We can think of no better way to honor and celebrate Andy than to assist a young man with similar characteristics and values achieve that same goal.